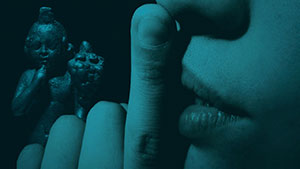 For my best friend Alfredo Fox, who with his recent physical death, filled my heart with inconsolable silences.

History speaks to this.

As a symbol of veneration and respect, silence was idolized as a God in antiquity. From its legendary Egyptian origin, it was given the name of Harpocrates. In Greece and Rome, his statue was placed at the entrance to temples to signify that all the gods are honored with silence. Harpocrates’ appearance was that of a young man with an Egyptian miter (cap pointed) or a basket on his head. With a single motion placing his finger on his lips, this figure would demand silence. The lotus and the alberchigo were consecrated to him, this last tree with leaves in the form of a human tongue.

Time has passed and today, in the 21st century, the great societies of modern rhythm have no notion of “delightful” collective silences. Why would humans come together only to remain silent? This notion seems inconceivable in a business-driven society that preaches that “time is money”. However, even in this noisy, modern world that we are immersed in, silence continues to be valid form of expression, or as a response to the circumstances of life. Sometimes “silence can speak volumes”.

To a judge, not responding to a subpoena means you are confirming guilt. In politics, as in diplomacy, abstaining is usually more forceful than voting. Not responding to a greeting or a question is interpreted as rudeness, pride or anger in the context of social interactions.

In the hectic city life that we travel, silence is like a strange character…an outsider.  This is why silence is not valued enough that “wonder” -as Cervantes once called it-, which forms the field of meditation, tranquility, fullness, of communication with infinity.

When groups or large crowds express themselves thru silence, it can be a dramatic force; peaceful marches, boycotts, and “taking a knee”, are some great examples powerful silence which can express disapproval and even become a moment.

Today, we can still fight and win by using silence, even if it is more complicated to do so and the mass media around the world know very well the impact silence can have on people and events, whether it has been forced or thru one’s own free will.

Silence is a means of expression so deep, diverse, undefined, that is nurtured in the most delicate corners of the human soul and pondered by writers, communicators and philosophers. There is a fine line within human being that is constantly redrawn and sometimes “silence can speak volumes”, perhaps because our essence is both speak able and unspeakable, spoken and silent all at the same time.

By José A. Ciccone